Beach Gets a Spring Clean

What a difference around 120 people made on Sunday, 28 October 2012 when they took part in a beach clean-up at Karioitahi Beach

What a difference around 120 people made on Sunday, 28 October when they took part in a beach clean-up at Karioitahi Beach! 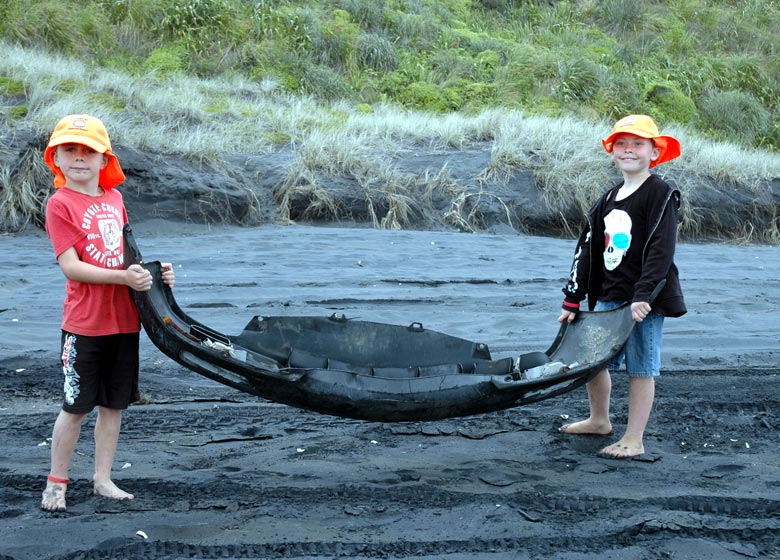 A stretch of approximately 12kms of beach was covered, with Transpacific carting away several tonnes of rubbish. In addition to the many car parts, broken glass and bits of plastic collected, a couple of the more unusual finds this year included a sealed letter for a Birkenhead address and a barrel of chemicals.

Several community groups turned out again this year and a couple of 4WD vehicles were on hand to ferry people down the beach and to collect waste and full rubbish bags from the volunteers as they moved along the beach.

It was heartening to hear comments from many people throughout the day that there was a noticeable reduction in the amount of rubbish this year, indicating the messages about responsibly disposing of rubbish might be getting through. One couple who sailed from England three months ago joined the clean-up and commented on the excellent initiative of encouraging people to care for such a beautiful beach. They said that they had seen many littered beaches on their travels around the world and that New Zealand's beautiful beaches need to be protected. And a mum said that she brought her teenagers to the clean up as they are keen users of the beach and she wanted them to learn to respect it.

The Kariaotahi Surf Life SavingClub team had trained First Aiders on hand and talked to the crowd during the BBQ at the end of the clean-up about the importance of swimming between the flags and always keeping an eye on conditions. Mr Robin Davies, NZ Steel's Vice President - Mills, Coatings & Services presented the lifesaving club with a cheque on behalf of the Company to support the ongoing work the club does to make the beach a safer place.

This event is a great example of business and the community working together to achieve a common goal: the protection for future generations of beautiful Karioitahi Beach.